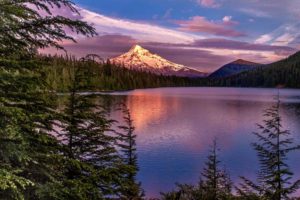 Hoodland is a 45+ square mile area located between Aldercreek (Ivy Bear) and Government Camp. It is also known as the “Hoodland Corridor”. The area includes the unincorporated communities of Alder Creek, Arrah Wanna, Brightwood, Government Camp, Rhododendron, Welches, Wemme, and Zigzag. There are also several other smaller neighborhoods that share resources, including water.  As a matter of fact, in that 45 square miles there are over 58 different water systems.

The water systems in the HAWC area range in size from serving over 750 customers to some as small as serving only 6 customers. Large or small, they are all in the same business… to provide safe and reliable drinking water to their customers.

After some initial meetings it was learned that the Federal Emergency Management Agency (FEMA) would not reimburse a system for expenses incurred by helping another system out, unless there was a Mutual Aid Agreement in place.  To that end, HAWC teamed with the Oregon Water/Wastewater Agency Response Network (ORWARN) to allow HAWC members enter into a mutual aid agreement with ORWARN.

HAWC meets once or twice a year to meet, learn, and discuss topics that are relevant to water systems in the area.